Awoke to power pet doggie -oh she’s I’ll has tested for cancer twice and has difficulty stand sitting…. So when I mean difficulty be I mean you’ll have to carry her to daily duties difficulty sitting standing…. I’m not kidding. However, I do know sucker ploy’s and don’t let this wolf hybrid fool you as shell sucker you big time into attention. Mostly you smile as what does it much matter, there’s joy even in the duplicity.

You’ll think it’s pain and surely there’s plenty discomfort s yet the joy isn’t an hour petting to ease what little you can for a ‘good girl’s. Nope. It’s a potty trip to no yelping whining. Hahaha.

She won’t really eat. So it meat or nothing. Have caught the really but not entirely? This girl even sick and I watch the multiple tacking not choke hacking dummy dog drinking I mean actual vomiting. There is zero doubt Wolfie Abigail isn’t well. But I’m very sure she’s not going out without some proper princess treatment. Do you concur?

Principal other issues are labored breathing that even in non moaning moments is unsound.

Now for a sweety who isn’t eating and all dogs eye your food… You know this or they stole it…. And they might zap you anyways. Well sweety who won’t really eat ate the whole double chilidog. Licking the plate.

Oh she’ll not be around forever. But it’s a joy to even be hustled by a legit Ill doggie. Someone is gonna milk it. Milk a man in the moon worth of cheese.

The smell in this situation is far nicer to nostrils than dried urine ala bus trip home.

That’s my smiles…don’t believe for a second I didn’t smile chilidogs comin’ myself. But my smile was to help bring some joy to the current god-pooch master passed in a car wreck a bit back. I’d like a bit even if I know I mean to milk it too. 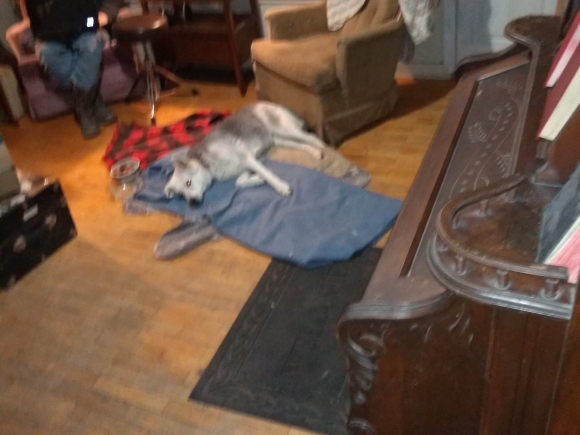 13 years so I hear. And naughty grub… Ain’t ever met a dog who didn’t have a door to heaven through their bellies. 😁. Rub n grub. But oi will she milk it!. Lol. Adorable thing. Hugs to you.