I accomplished NOTHING today… don’t get me wrong, I did a dish in the sink from dirty to clean, I did laundry the same way-amazing fresh smells aboat the place!  har har har. I acheived nothing though.. again no, it isn’t the tasks it’s the motivation.  I acheived the peace of nothing.  I didn’t have to do seemingly anything.

I thus watched  russel crow/e and e robinhood the new way rather intrigued robin hood can or can not be an actual person…. the best bits of legend are friar tuck and maid marion and they only late addditions to the tail…figures.  I suppose it was most apt that the point they harped upon was the archtype of the tale….ultimately the tale is told to it’s times but middle class….there is something above slave/serf and below tugging up god’s underpants royalty.  plus the neat of what bows and stuff were good…

I can’t say my brush with nutrients in the vitamin a laden squash I did upagree with me.  I can’t say I was jazzed hearing and enjoyinging the empty of no one trying it but me thrill me…I can say I haven’t ever toasted squash of the butternut variety before.  those of you who follow me on facebook have seen the pick 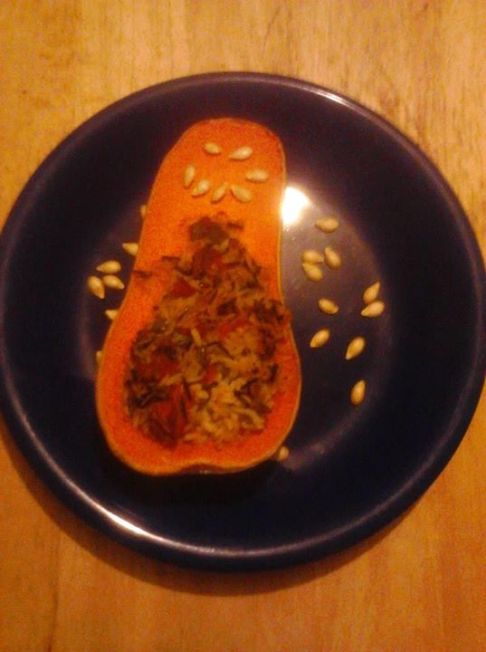 yes this is half a squash and 457% of one’s vitamin a.  and every bit too damn much to eat in one go.  it is rice a roni white and wild rice 1 dollar at walmart, rotel mild tomatoes and chilies about a dollar at target andone butternut squash also from walmart and a table spoon of butter courtesy of kingsoopers.  the hardest thing was cleaving the squash in half and the second hardest thing was dabbing and rubbing the yuck off the seeds,  the rice was easy follow directions and scooping out the strig and seeds wasn’t that hard either.  hint while not a vegan dish as it has butter, it is vegetarian.  cleave squash, remove seeds and strings, discard strings save cleaned seeds.  cook rice per package only adding atop it a drained can of rotel….fill with rice mix and bake preheated 375F oven about just over an hour adding seeds the last 20 minutes….careful to not let seeds be a mound  even single layer…  voila.  not hard nor bad tasting veggie dinner…I suppose the complaints are obvious in that a half squash is double what anyone can eat yet you cant bake this as portions or the stuffing falls out….and that if anyone reads the contents of the food the rice mix is higher in sodium unless this dish is strictly 4 portions…enjoy though it gives me gas and I’m not a fan of mega vitamin a Idon’t like liver and am nnh on carrots brocc ecant get the liver downxxtc anything good for my eyes.  I don’t hate the veg while I cant get liver down… but again it’s easy and someone likes something 😀  mmm the seeds tasted hull and all like popcorn

I looked up suiperdobe and I finally see another dream stale some in that it’s possible but something in there seems not resource necessary but what poor people might desire and thus pardon me while I have a little snobby problem instead of taking joy in acheivements of needs met….I might get over it.  however if you watch enough of the vids you see maybe what I do which is a mixed clay be this hempcrete or stabilized earth ala superadobe and…. yeah so?  it isn’t as magic as it felt when it was a house I could afford when the dream of such seemed impossible.

well, here’s a beer to the end of my weekend your week.

I had a busy weekend…and FUN! AND I got a lot of stuff done!
Wanted to come by and leave you some happy wishes and HUGS!!! 🙂
How was your weekend?!

goodie! busy weekends mean more room for whatever one wants